Asbestos dust causes disease, it’s a proven fact. In order to fully diagnose the effects of asbestos, a complete physical is highly recommended, including chest X-rays, for anyone who has been exposed to asbestos.   The many forms of this mineral create a toxic, often invisible dust when disturbed, which can remain suspended in air for long periods. Inhaling microscopic asbestos particles allows the toxin to become trapped in the lungs and pleura. Pleura is the name given to tissue lining the stomach and chest cavity. The needle-like fibers of asbestos penetrate deep into body tissue and over a period of 10 to 40 years; can cause fatal diseases to develop. 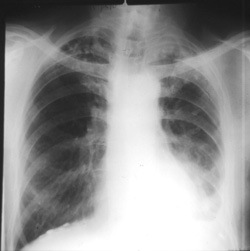 Severity of the disease depends on the length of exposure and concentration of asbestos inhaled, as well as frequency of exposure and type of asbestos involved. Amphibole asbestos is thought to be more damaging than serpentine, as short needle- like fibres can travel further into the lungs and are more difficult to expel.

In the 20th century, asbestos miners and factory workers spent decades working in environments thick with dust from chrysotile, amosite and crocidolite. People living near asbestos mines and factories have contracted asbestos related diseases. Today, scientists know that the effects of asbestos, even short exposures to airborne asbestos, may cause disease many years later. No concentration of asbestos is considered safe or guaranteed not to cause disease; that said, there is an accepted standard of exposure for those who work with asbestos: 0.1 fibre/cc/8-hour period.

Asbestosis – Asbestosis was unheard of before the asbestos boom of the 20th century. While not a cancer, asbestosis is a long-term, incurable illness compromising normal lung function, and is sometimes fatal. Mesothelioma may develop in patients suffering from asbestosis. When asbestos fibres are inhaled, lung tissue becomes infected. The body responds by fighting the inflammation. Another effect of asbestos is that scar tissue forms, reducing lung capacity.

Latency period for asbestosis may be as long as 20 years. This is the amount of time between exposure and diagnosis. Symptoms are different from patient to patient; one afflicted person may die after fighting the disease for years, while another notices no discomfort. Typical symptoms include shortness of breath, persistent cough, chest pain and loss of appetite. Smoking is known to increase severity of this disease. Oxygen may be prescribed as breathing becomes more difficult for the patient. Anti-inflammatory medications are also recommended. As the body tires from fighting asbestosis, the disease can become fatal with the lungs and heart stressed beyond their capacity. Staying away from asbestos is the most effective way to avoid contracting asbestosis.

Australian Institute of Health and Welfare 2020

To find out more about the effects of asbestos, contact the friendly team at QBM today!